say being dead but kittenish?

Ozzi, our neighbor to the right's kitten, has adopted us, we open any door and in she sprints. Fleabus unhappy, responding to us with furious attacks of love meows and cuddles, Rosie gives no fuck, Stanley - I need to write about Stanley, first to myself, don't worry - Stanley is curious, purring and singing and trilling - I need to make a video of Stanley's purr and song and trill, and Olive is 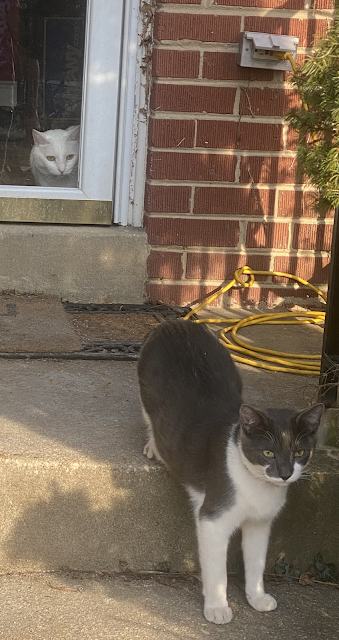 Momcat o fuck but chill, Napoleon o fuck but chill, Frankie - the most inside baseball joke this shitty bleg can do - Frankie, who we think drove away his and Nap's sister Greycat - I don't think I ever wrote about Greycat, I know I've mentioned Frankie for the inside baseball joke but I have never written about Frankie in any tablet ever - Frankie is an asshole, I think if his brother Nap dies before their mother (an increasingly apparent possibility) Frankie will drive off Momcat, he's doing recon on Ozzi from the azalea bushes, he might be old man smart enough to know his most vicious attack Ozzi will see as playing and kick Frankie's ass thinking it play

Artificial friends, cats. Not done with Ishiguro's Klara and the Sun and I will need reread it again and soon but the obviously uncanny is that of people I love in my life I've seen three in the past year in person and here I am typing at you who live miles from me and have no more desire to meet me in real life than I do you, and I true unconsciously true self-consciously synch with favorite makers and Ishiguro always tapped that Mwah on the my  widget until *Buried Giant* and I thought my Ishiguro widget dead, and if *Klara* is mwah > Mwah at least I know that I'm not dead

LotS! of deleted and (omni)present bleggalgaze (fills tablets that have no mention of Stanley or Frankie), reminded I dig Arab Strap

What if the ability
to capture
emblems in the wild
won’t validate us?
What if displaying
our embarrassing flaws
won’t save us —
say being dead
but kittenish?

I can’t show you anything
new, not even
an empty room
behind a velvet rope.
Least of all that!
There’s a Lexus
spinning in a parking lot
because a mountain road is
“so cliché.”
It’s throwing up dust, then more,
but you know the car’s
still in there
somewhere,
still voguing
Posted by BDR at 8:33 AM

Email ThisBlogThis!Share to TwitterShare to FacebookShare to Pinterest
Labels: Brazen Blogwhoring and Attention Sluttery, Dead Blegsylvania, Fuck It, Fuck Me, Fuck This, My Blindness, My Complicity, My Inability to Shut the Fuck Up