Beloved Mr Alarum Sasha V Alexa has a new space and been added to the Me and Mine blogroll, we have met in the flesh, the sole ground rule for membership. Jim, who I met in the flesh precisely once when he was in DC with his kid for the Stewart/Colbert whatever the fuck that was years ago posted yesterday for the first time in months, a manifesto about killing my social media self and saving my analog life. Occurred to me I've met Elliott in the flesh, he was in one of the mortuary blogrolls (though he posted two weeks ago) (though not exhumed him from mortuary, remind me, please), he's now added to Me and Mine, I ran into him on Prospect week before last, he loved the Michigan photos, wants to hike, will be in touch, I could show him the Ten Mile Creek Trail, we did the north end yesterday (including Cold Spring Trail), this the most activity combined in Me and Mine in a decade 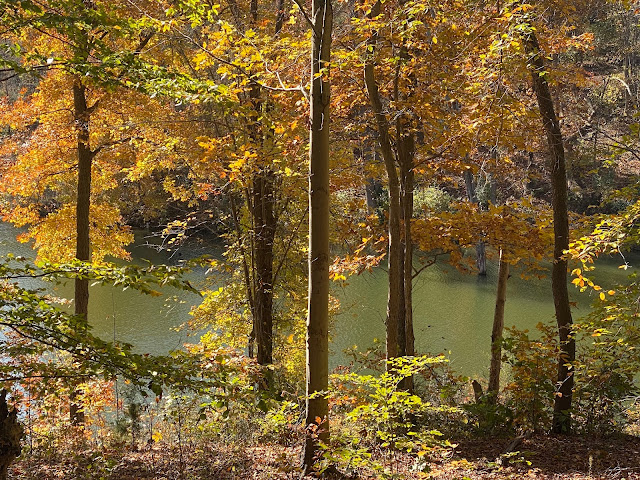 Think of the storm roaming the sky uneasily
like a dog looking for a place to sleep in,
listen to it growling.
Think how they must look now, the mangrove keys
lying out there unresponsive to the lightning
in dark, coarse-fibred families,
where occasionally a heron may undo his head,
shake up his feathers, make an uncertain comment
when the surrounding water shines.
Think of the boulevard and the little palm trees
all stuck in rows, suddenly revealed
as fistfuls of limp fish-skeletons.
It is raining there. The boulevard
and its broken sidewalks with weeds in every crack
are relieved to be wet, the sea to be freshened.
Now the storm goes away again in a series
of small, badly lit battle-scenes,
each in "Another part of the field."
Posted by BDR at 9:33 AM

Email ThisBlogThis!Share to TwitterShare to FacebookShare to Pinterest
Labels: Brazen Blogwhoring and Attention Sluttery, Dead Blegsylvania, Futility, My Blindness, My Complicity, My Inability to Shut the Fuck Up
Newer Post Older Post Home