To stop myself thinking about it I bought an Arches 12 x 12 hot-press watercolor block which, if I'd thought about it instead of thinking I needed to buy it, is too big for the bed of the scanner I use so I can post the squares here and there and too big for the laminator I use so that the squares can be handled without fountain pen ink staining fingers, the below is the 12 x 12 cropped to 11 x 11, fine metaphors abound 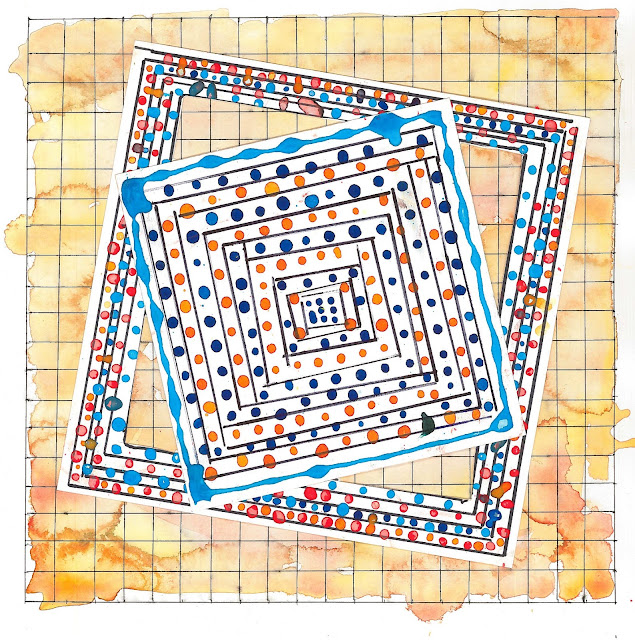 I've stopped exactly halfway through Fosse's *Septology.* I forced myself to pick it up once, not twice, I sin for not reading it end to end like I once told myself I sinned if I didn't but promise to read after I finish, laugh, McCarthy's *The Passenger,* let me say this about that, I've ordered *Stella Maris* which I'll read after I finish the second half of Fosse's *Septology.* Fosse's Asle has a dog, McCarthy's Bobby has a cat, John Cale has a new song:


Many echoes between the two novels, many probably just me reaching, shared themes, standard novel info-striptease. *The Passenger* is often funny and on two occasions so far laugh out loud funny. I'm open to it and I don't know if I hope I'm wrong or not but lay heavy odds that not *once* will I laugh out loud reading *Septology,* which I will finish though now I like the guy whose move is short verb-less sentences versus this 824 page one sentence novel, another fucking one sentence novel, now, more often than not squeezed into a single paragraph sausage if you're lucky, a too common and now irritating gimmick, it's old, motherfuckers. Old, though below is a new Yo La Tengo song

The people in the elevator all
Face front, they all keep still, they all
Look up with the rapt and stupid look of saints
In paintings at the numbers that light up
By turn and turn to tell them where they are.
They are doing the dance, they are playing the game.

To get here they have gone by avenue
And street, by ordinate and abscissa, and now
By this new coordinate, up. They are three-
dimensional characters, taken from real life;
They have their fates, whether to rise or fall,
And when their numbers come up they get out.

Email ThisBlogThis!Share to TwitterShare to FacebookShare to Pinterest
Labels: Autoblogography, Brazen Blogwhoring and Attention Sluttery, Dead Blegsylvania, Futility, John Cale, Mememe, My Blindness, My Complicity, My Inability to Shut the Fuck Up, Nemerov, Yo La Tengo