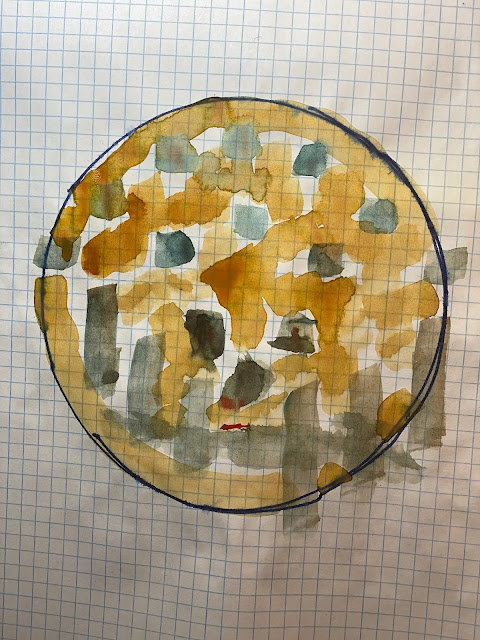 
God says to the meek one, “On Sunday mornings, have them say ‘Yes’—say ‘Yes,’ brightly.
Have them nestle dollar bills in the knots of elm trees; use three times the zest in their lemon curds.
If it’s snowing, open the flue and start up the fire. Tell them there’s a double-dutch
jumprope with their name on it. Paint the windows violet, paint the lattice pink. Tell them every
knock-kneed great blue heron is just like me: long legs, quick eyes, and chock-full of
longing. Tell them I’ve got a real doozy of a crossword clue that I just can’t get—eight letters, ends with an x.” So the
meek one says, “All right”—goes to the window, sets his yellow workgloves on the sill. He could
not be more tired. His fingers have that tingling feeling, like they’re boiling—it must be below zero outside, he thinks, too cold for walking. But it’s plenty warm in here. If he’s honest, the meek one’s had
one hell of a day. His mother’s dying—can only eat bananas, milk, and bits of uncooked dough. He just can’t
put it out of his mind. Her voice is thinning out a little more each morning: when she wakes up crying, it sounds like a kestrel singing from far off. Sounds like she’s got a
question stuck in her throat. What that means to the meek one, he doesn’t know—for now, he’s waiting for the snow to fall a little softer, for the
room to darken, so he can set out—keep x-ing the boxes on his to-do list. At least it’s warm here, he thinks. God says to the meek one, “On
Sunday evenings, have them bundle their children in blankets made of pansies—yellow over blue—then hunker down for the night. And if they have to leave, remind them
to zip up their coats—it’s cold, ice cold, out there. In the crawl space
under that double-wide, there’s a nest of jaybirds—tell them not to look, or the birds are prone to
vanish. Ask if, sometimes, everyone would just keep quiet.
When a foghorn lows at night, pours itself out on the salt reeds and beaches, rattles the pier’s
x-shaped pilons and sets the gulls flying, ask if they’ll just listen.” So the meek one says, “All right”—keeps looking through the window. There’s a grove of
young aspen trees—“daughters,” they’re called—laid bare by the cold. The meek one is not sure they’ll make it. As a gray snowbird
zips from one naked branch to the next, the meek one thinks
about his mother. She’ll be getting hungry soon. She mostly stays in bed, but yesterday the meek one found her crumpled on the
bathroom floor. Her long hair—always in a neat, high bun—was spread wide on the slate, bright as zinc. One summer, when the roads were dirt and the roof was tin, a thunderhead
crawled through town like a freight train—no rain, no hail, just hot wind and lightning. At the time, the meek one’s mother said the storm could take the house right off its feet; would
draw the meek one clear up to heaven if he didn’t just stay put in that bathroom, hold tight to the hot water valve, and hope—said she’d be right back. But the meek one couldn’t help it. When the storm shook the house, he ran to the main room and peered out the window.
Even in the half-light, the meek one saw his mother at once. She was lying on the knoll outside, holding quick to two fistfuls of grass—watching the black cloud fill and empty with long threads of light. She was speaking into the wind. The warm air surged against her upturned face, must have filled her lungs—drew skyward a havoc of her black hair. At the time, the meek one thought she might have been saying, “Please.”
From the other room, the meek one hears his mother wake, try to rise. The light dims. He slips his gloves into his back pocket, takes up his list and marks one box with an x. Turning from the window, the meek one says, “All right.”
Posted by BDR at 9:32 AM